That’s Quenya (one of Tolkien’s languages), and it’s a traditional Elvish greeting meaning “a star shines on the hour of our meeting.” It was correctly translated by my blogging friend Amelie. In return, she gets free book recommendations, which I’m sharing with her (and you) in this post.

Before I get started, though, I want to remind you that book recommendations (in the form of a post or just via email) are available to everyone through my blog! Click here and scroll down to fill out a form and receive free suggestions of books I think you’d enjoy. This is one of my favorite things to do and I hope more people take advantage of it. Amelie’s the first!

And now…meet Amelie! Amelie blogs at Swordmaiden of the King about writing and following Jesus. I love her blog title! Her posts are amazing too, so I encourage you to check out her site.

Amelie’s answers to my questions ↡

my book recommendations for Amelie ↡ 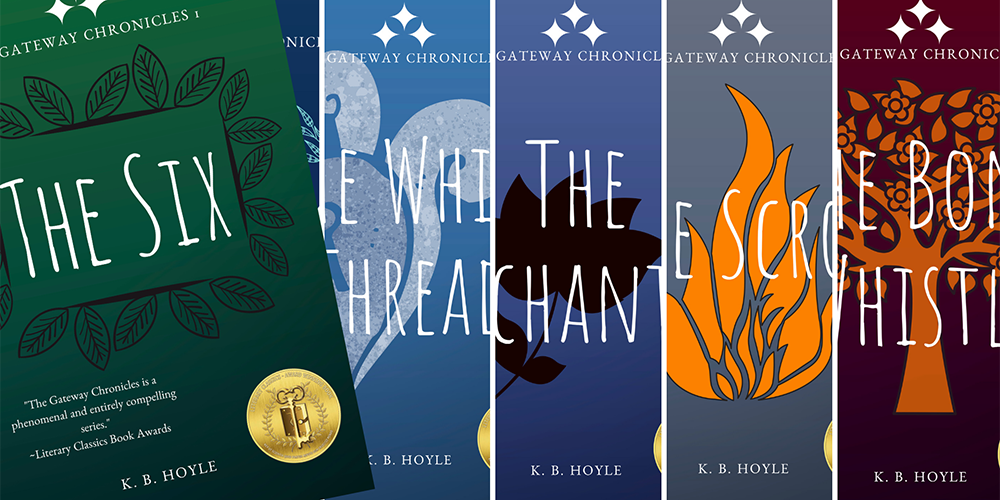 1. The Gateway Chronicles by K.B. Hoyle

I first heard about this series because the author goes to the same family camp that I’ve been to since I was very young. This Christian fantasy is set at that family camp (the name is changed), and it’s about Darcy Pennington, an introverted, awkward 13-year-old whose parents force her to go to camp. She determines not to enjoy herself but ends up going through a gateway to a magical world with five friends and discovering that she’s prophesied to save the world, get married, and defeat evil.

I recommend this series to Amelie (and anyone who loves fantasy) because it reminds me of the Wingfeather Saga, but aimed at a slightly older age group. It grapples with real-life issues like dating, marriage, free will vs. God’s will, and grief through the medium of storytelling, and it’s very fun to read! I read the whole series in less than a week. The writing is skillful and the worldbuilding is amazing – K.B. even made up a new elf-like race called narks that I love.

Titles: The Six // The Oracle // The White Thread // The Enchanted // The Scroll // The Bone Whistle

True love is born of time and trials, and it is rarely caught up in feelings. 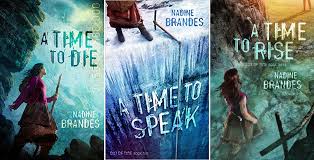 2. The Out of Time trilogy by Nadine Brandes

Nadine Brandes is another of my favorite contemporary Christian fantasy authors. This dystopian series asks the question “What would you do if you knew when you were going to die?” and then follows the life of Parvin, a teenager whose Clock proclaims that she’ll die in less than a year. She hasn’t done anything with her life, and in a desperate attempt to be remembered, she crosses the Wall to the west side of the world – a separate, wild, unknown side – and sends back journal entries to tell her story. What she finds isn’t what she expected: it’s dangerous, surprising, and could change the way everyone in the east lives. If she can return before her Clock runs out.

I picked this series because Brandes’ style and content reminds me of N.D. Wilson, the author of The Chestnut King, and because I think any reader of Christian fantasy should try her books. (She has two others – Fawkes and Romanov – but I think the Out of Time series is the best place to start.) Nadine Brandes tells a beautiful story interwoven with Bible verses and covering difficult topics like relationships (romantic, friends, and family), death, betrayal, good vs. evil, and what it really means to live. This is one of the few trilogies I’ve read where the books keep getting better.

Content: a little bit of romance, lots of violence, family tension, deaths and severe injuries (my recommendation is ages 14+)

God will never instruct me to be afraid, so I might as well get used to reminding myself to fear not.

– Nadine Brandes, A Time to Rise

This duology by Jonathan Auxier follows two young children on grand adventures. In the first, Peter Nimble the blind thief and his companion Sir Tode, armed with a set of magical stones, set out to save a lost kingdom. In the second, Sophie Quire must become a Storyguard to stop the people of Bustleburgh from destroying stories forever. Both books have overlapping settings and characters and can be read in either order (though I recommend Peter Nimble first).

I love these books because they’re fun, adventurous, quick reads that hold big ideas: the importance of stories. The power of family love. What can happen when you ask a question. The magic in the ordinary.

Content: violence (not a lot, but more than you might expect in a middle-grade book. For that reason, I usually suggest ages 12+ for these books)

Titles: Peter Nimble and His Fantastic Eyes // Sophie Quire and the Last Storyguard

You may have observed in your own lives that there is a great power in storytelling. A well-spun tale can transport listeners away from their humdrum lives and return them with an enlarged sense of the world.

Since Amelie said she’s currently reading The Chestnut King, I decided to suggest The Door Before. It’s the prequel to the 100 Cupboards series: the story of Hyacinth, a girl whose forest magic is prohibited by her parents’ order. When she meets two boys from another world and discovers that she has the power to open gateways to their home – and other unknown realms – she must flee and leave behind her family.

I love N.D. Wilson’s writing because he shares powerful truths through amazing fiction, and The Door Before is a great place to start because it’s also a (sort-of) prequel to his other series Ashtown Burials (The Dragon’s Tooth, The Drowned Vault, Empire of Bones) and it’s fairly short, which gives you a chance to decide if you like his style or not. My sister really doesn’t like Nate’s writing, but he’s my second favorite author (only Tolkien beats him), and I don’t think there’s a middle position: you’ll know, after reading this book, whether NDW is for you or not.

Content: violence, scary scenes, witchcraft (there’s a lot of disturbing stuff in NDW’s books, but it’s always beaten by good and light. Ages 12+ for this one, but Ashtown Burials is more of a 14+)

Sometimes standing against evil is more important than defeating it. The greatest heroes stand because it is right to do so, not because they believe they will walk away with their lives. Such selfless courage is a victory in itself.

5. The Shiloh series by Helena Sorensen

This beautiful, emotional series about the dark and light was written by a friend of Andrew Peterson and S.D. Smith. The first book (which is the only one I’ve read so far) tells the tale of Amos, Simeon, Phebe, and Isolde, four teenagers who live in a world where the sun never shines. Amos is captivated by a mysterious stranger who promises him power, but the others distrust him and chase after Amos when he runs. The second book (which my sister has read) jumps back in time to cover the beginning of the world of Shiloh, and I can’t wait to read it and the third one.

Sorensen’s writing is layered and rich, and her stories show clearly the light shining out through, above, beyond the darkness. I think of this series as a fitting companion to the Wingfeather Saga and the Green Ember books: a bit darker, a bit deeper, a bit more mature. And just as rich and important.

So I set my eyes to the sun and walk. One day something may grow so tall its shadow falls across my back. And if I feel its shade, I will not turn, but smile. There are seeds to be planted, and the road is calling.

To Amelie, and everyone who’s reading this, I hope you find some books to make you happy, fill your hours, and change the way you see things. This was a delight for me: I’m so glad I get to share some of my favorite books with you.

have you read any of these books? do my descriptions make you want to read them? do you want personalized recommendations? talk to me in the comments!

I write about courage and hope in the midst of darkness. Welcome to my blog, where I share my stories and ideas.  Will you join me on my journey, friend? There will be pain and tears, but it’s all worth it.

things I write about